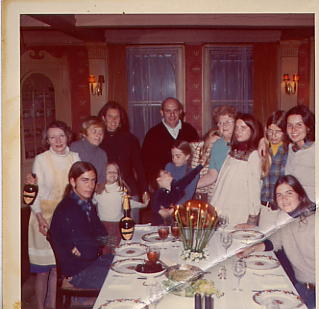 Born on in New York City on New Years Day, 1922, as a youth Bob lived at Waldorf=Astoria, where his father, Frank Ready, was the president. Frank met Bob’s mother, Ethel Severs, when she worked at The Knickbocker hotel in Manhattan in the 1910s.

Bob attended Barnard School for Boys in New York City and Philips Exeter Academy in Exeter, New Hampshire.  He graduated from Cornell University Hotel School in 1944, after taking time off to serve as a lieutenant in the Army Air Force.  Shortly after marrying Carol McGuiness in 1951, he moved to Rumson. After her death, he married fellow Cornellian Ann Grady and together they raised their family on the Jersey shore until Ann’s death in 1991. Their huge Victorian house on Avenue of Two Rivers was a gathering place for an entire generation of Rumsonians.

Bob spent most of his career in the hotel and food service industry as a salesman, manager and owner. He helped organize the Gotham Bowl, a college football game played at Yankee Stadium in 1962. He was one of the first blackjack dealers in Atlantic City when Resorts International opened in 1976. He also worked as a substance abuse counselor, both formally and informally.

He was a long-time parishioner at the Holy Cross Church in Rumson and a tennis-playing member of the Monmouth Beach Bath and Tennis Club for most of the ’60s and ‘70s. His lifetime passions included Broadway musicals, big band music, The New York Times and The New York Giants.

A memorial service is scheduled for April 14 at 10 a.m. at Holy Cross Church in Rumson, with a gathering of friends and family to follow.